Rik (Freshman at MIT) on the Importance of Having Focus, Support & Direction - Create & Learn Role Model of the Month

To inspire our students, each month, we feature a college student or recent graduate about their experiences growing up. We hope the paths they have taken can help open up the world of STEM and beyond to our students as well.

Now meet Rik, our role model of the month and a current freshman at MIT. Rik has always been enthralled by science and math. He started creating projects in elementary school, and they grew more complicated as he got older, from creating a ping-pong playing robot in middle school, to entering science competitions. Rik attended a special high school focused primarily on math and science, with the hopes of creating things that help others.

At MIT, Rik plans to major in electrical engineering and computer science. He also gets to work in MIT’s Design Lab working on next-level technology and innovations!

At Create & Learn, students learn state of the art computer technologies Rik talks about such as AI, coding, and robotics, with experienced teachers -- check out our wide range of classes here!

How do you think your high school helped you get into a place like MIT?

I think my peers had a huge impact on my life in regards to my career path, what I wanted to pursue in school and beyond. I think having a support system, especially back in my old high school [that was all] about science, where students were very ambitious and very driven to pursue their interests. Whenever I talked about being interested in engineering, computer science, and building robots, or building assistive technology for individuals with disabilities, I always got that support from my peers and they really helped me get where I am today.

What advice would you give to a younger student who might want to go into seconds later on or go to a school like MIT but they may not have the resources growing up?

Honestly, another big support system I had was my school. So, if you even go talk to your teachers, they should be willing to help. But also thanks to the Internet we have so many resources online, so feel free to like look online whenever you're curious about something.

Tell us a project you did and middle school?

I was first introduced to programming and robotics through the FIRST LEGO League and I remember at home this was a time when I was like summer break and I wanted to play a lot of ping-pong with my friends, but my friends wouldn't always be around. I decided to build a ping-pong playing robot. in the sense that it was a little robot that would shoot ping-pong balls at me and I could just hit it back and then there'd be a conveyor belt system that would take all these balls I would hit back and put it back into the shooting mechanism so I could just practice.

Did you get better with that robot?

What projects did you do in high school?

In ninth grade, I actually built a concussion detection system for youth football players as part of my science fair project and I used a small little microcontroller / mini computer called the Intel Edison and I use an accelerometer. This project was based around the concussion epidemic in youth football, and I remember reading it in the news -- a lot of my ideas and my projects are sparked by things I read in newspapers and things that I would see on TV -- and this was one of those things. So I basically built a concussion detection system that could detect if player might have a concussion based on the force that would apply to their head, and the helmet will detect that and then if they goes beyond a certain composite potential that that might be dangerous for the kid’s health, then the the coach will get an email notification saying that the player might have a concussion and he should be pulled out of the game.

I've got a lot of different projects over the course of my four years in high school, and I've had a lot of support as well, so I'm thankful. 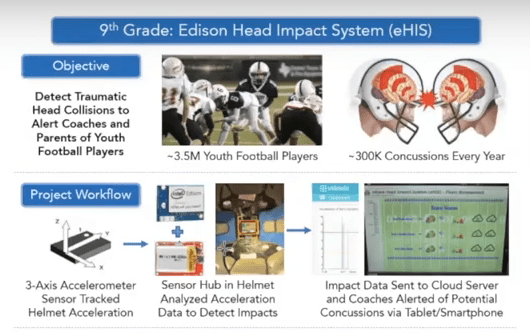 What inspires and motivates you?

Having the potential to make other people's lives better, that's what motivates me. I think STEM - engineering, science, math, all these types of fields - are a medium through which I can help people have better lives.

I think at the end of the day, life is about the people you surround yourself by, and if you can contribute to society by making people the lives of people around you better, then I think that's one of the greatest gifts you can give.

If kids are only a second or third grade -- or even in middle school -- and they have an interest in STEM, what should they be doing to get to where you are?

But really what I think took me on the career path that I'm getting right now are these 3 main qualities in my life. I call it FSD: Focus, Support, and Direction.

Focus was on myself. I had a focus in school, I had to focus on my project, and I had to be persistent. I would face multiple challenges during these projects I would but being able to focus and push through those challenges and make myself into a better person was the main goal.

Support. As I said before, the support system that I had was crucial. My parents, my peers, my mentors, the teachers and coaches, everyone. That support system is what builds students into something great.

I feel MIT has it's this very nerdy and geeky type perception for the entire world, which is true to an extent, but in fact, like the the dorm I’m staying at right now is known for all of its student athletes. So, I'm alongside all these students who are not only good in school, but also very athletic. There's a huge diversity at MIT that is sometimes not really known. After coming here and being able to speak with student athletes, students who are interested in music, the fine arts, and seeing that not only are they super interested in pursuing a career in engineering science but also they have these really cool hobbies.

# AI, Education, Robots, Role-Model-Of-The-Month, STEM
Create & Learn to Compete in Premier Global Competition for Emerging Companies that “Bend the Arc of Human Potential”
TechNews4Kids - Will a Robot Be Delivering Your Pizza Soon? MIT Hopes So!
Subscribe for newsletter
Subscribe